The future of the recycling processes

The future of the recycling processes

How to get the future out of the dumping-ground?

If today nothing is changed, after several decades we will sink into our own waste. Will the scientists solve the problems with the waste? The waste is a disaster whose scale threatens the life on the planet. The question is: who will win, the waste over the man or the man over the waste?

This problem dates back from the Antiquity – archaeologists have discovered dumping-grounds, which survived for almost 2500 years, which still “keep” the waste of the ancient civilizations. Today the list of countries which ‘drown’ in waste is a long one. Champions are the US, China, and Russia. There are catastrophic ‘dark’ spots on the ground: Island of waste in the Pacific Ocean, cemeteries for nuclear waste, huge waste dumps of electronic waste, etc. 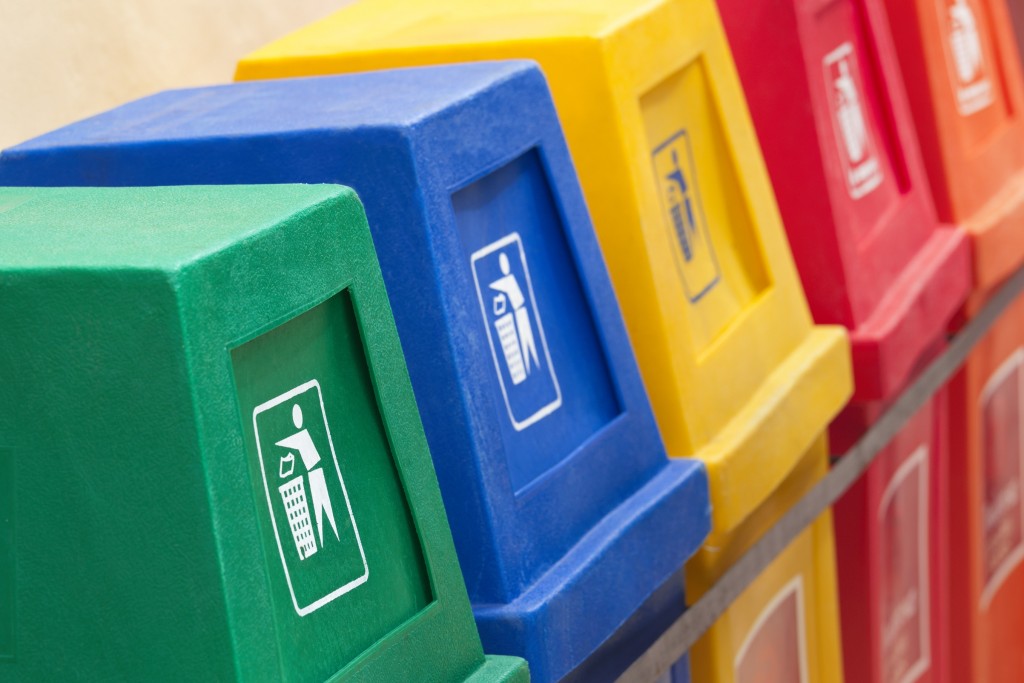 The waste can and should be used as raw materials. Here are a few examples of successful experience in the fight with the waste and some unusual means for their processing:

1 Sweden processes its waste and “cleans” its neighbours.

Sweden is a leader in the recycling – the trash is a cheap source of energy, fertilizers, and raw materials. More than 30 % of the power stations in the country work with waste, as they burn around 5.5 million tonnes of garbage per year. Gravel is produced from the ash. This way, Sweden has achieved incredible success – less than 1 % of the waste is sent to land-fills.

Annually, the German government reminds its citizens how to sort the waste, by letter with clear instructions. The sorted waste is recycled or burned in power stations; 12 % of the homes are powered by the produced electricity.

The Singapore authorities have the most original decision in the fight with the non-burning waste.  It is rammed on the artificially built island of Semakau. Its creation started in 1999.

Today, the area of the island reaches 350 hectares. It is planned that until 2035 its building should be completed. Anywhere on the artificial island grow trees, and in the water, you can swim and fish.

In Japan, the artificial islands are an opportunity to resolve the problem of land shortage. Trucks pile more than 500 thousands tonnes per year processed waste. The soil is piled up on top of it and trees are planted. On one of these “green” cemeteries for trash now the Olympic facilities for the Summer Olympic Games in Tokyo in 2020 are built. The media reported that the uniforms and the outfit of the Japanese team for the Olympics will be made of recycled plastic.

4 South Korea transported the waste under the ground.

The town of Songdo, built 60 kilometres away from Seoul, deservedly can be considered the city of the future. Unique technologies are used, which are not available anywhere in the world – a system of sewerage channels, through which the garbage is transported to the sorting machines. Local authorities plan to build a plant for the production of gas from the waste.

This country is known for its number of dunghills. Particularly acute is the problem with the plastic. They apply a technology for incorporation of the plastic in road construction – they replace up to 15 % of bitumen. In India, there are thousands of kilometers of plastic roads made already. The government encourages the population to collect and deliver the waste at paid collection points. 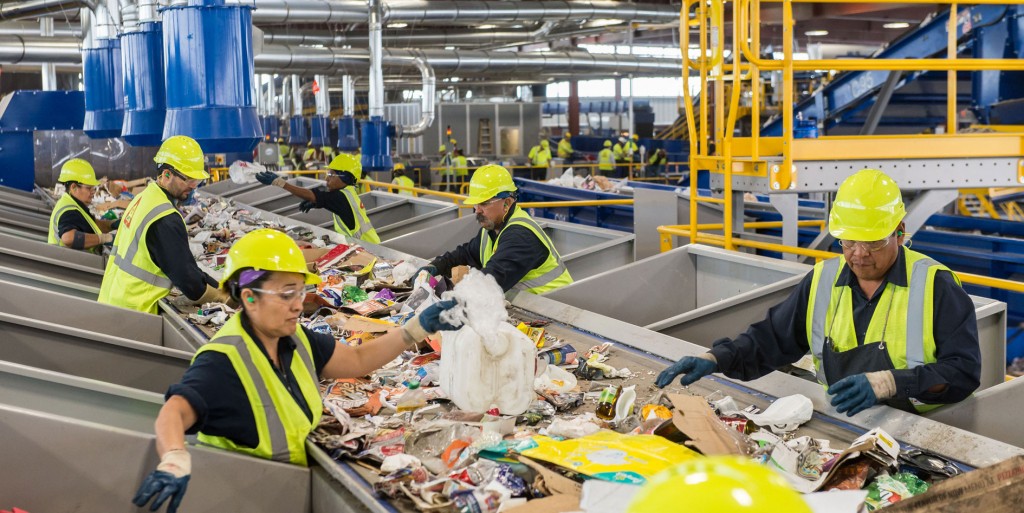 Trash is a valuable resource

Today it is extremely important that the waste should be recycled. The building of land-fills is a decision by the technologically underdeveloped countries. Sorting, processing and the use of recycled materials is the path of the successful and rich nations or the so-called ‘circular economy’ “Circular economy”.

The processing of trash solves many global problems: The contamination of the planet, shortage of energy resources, decrease in the forest areas, food crises, unemployment. Here are a few examples to deal with the waste:

1 Fertilisers, electricity, and biogas are obtained from organic waste.

In the composting, carbon dioxide, methane, heat energy and compost are formed.

The incineration installations convert the waste into light, heat, and slag for the building.

Pyrolysis and gasification make possible the obtaining of combustible liquids and gases from hazardous waste, i.e. fuel in pure form.

The technology for obtaining biogas (methane) can be called an updated version of the composting. It is used as a motor fuel, fuel for power plants and for heating.

2 Recycling of plastic, paper, and other waste

Waste paper is a raw material, which replaces the wood.

The unusable batteries are a source of metals such as lead, nickel, lithium, cobalt, cadmium. The electronic scrap is a valuable source of gold and other precious and rare metals.

Japanese biologists have discovered bacteria that is able to eat only the PET plastic. By two enzymes, the micro-bodies decompose the plastic into water and carbon dioxide. Problem: The bacterium work slowly, dissolve the plastic for 6 weeks. If the scientists manage to synthesize the necessary enzymes, the degradation of the plastic can be accelerated.

3 Making the nuclear waste safe. Laser instead of burying?

Radioactive waste is disposed of by using special methods of packaging, storage (earthing up) and deactivation. The result of these efforts is one – an embarrassing “gift” for the descendants.

The hope for solving the problem of the nuclear waste is the discovery of a group of Russian scientists who, via the laser, have accelerated the cesium-137 dissociation from 30 years to 1 hour. 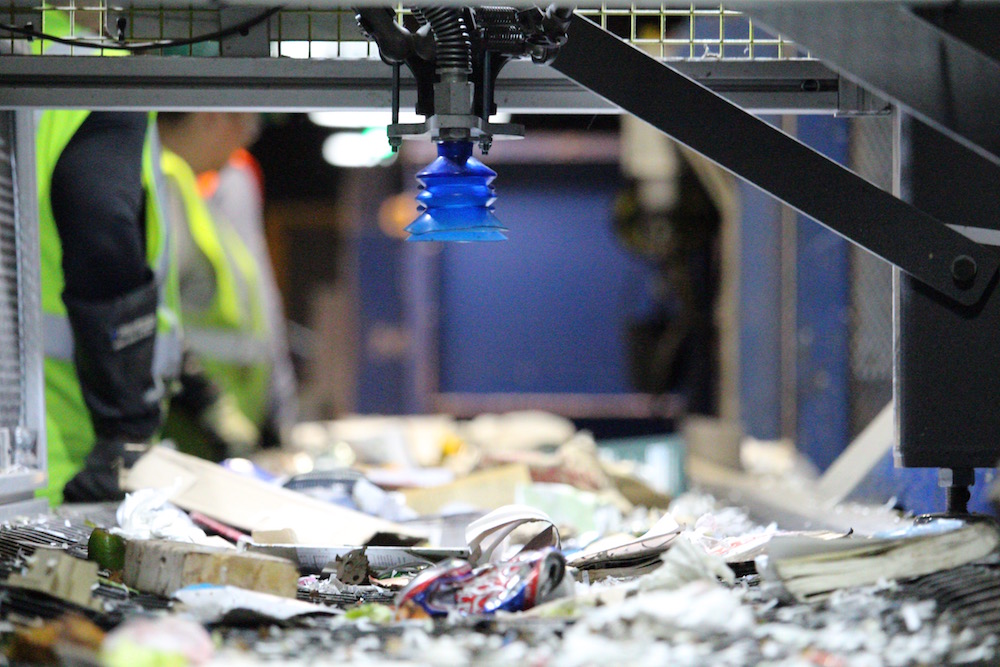 Will the artificial intellect save the world from waste?

The findings of the scientists give hope that in the future the planet will be cleaned not with chemistry, fire, and other barbaric methods, but with the aid of plants, bacterium or with the aid of artificial intellect.

How to turn the stinky landfills into Blooming gardens? The answer is through the new waste-treatment technologies.

1 Teach the robots to sort the waste.

With an infra-red camera and an optical sensor, the robot determines the composition of the waste, but still allows mistakes to slip in. It is difficult for the artificial intellect to distinguish between a cardboard box and coloured plastic when they are crushed or dirty. That is why scientists actively teach robots to understand the complexity of the waste.

2 Funny cleaners on the streets

The robots – street cleaners, are a fun and cause pleasant emotions in the passers-by.

In Japan a small wheeled bin has been invented which can speak: when it sees trash it asks for it to be binned. The robot entertains the kids and calls them to dump their rubbish.

In Italy, the container Ovetto recognizes the trash in the person’s hands; opens the required compartment and wants the trash to be crashed and dumped in it.

The Europeans have created robots which clean the streets. The first one is DustClean. It goes around the area on a particular route and cleans. The second one is the DustCart. Its task is to collect garbage bags from “customers” and to transport them for processing.

A lot has been written about the islands of the waste in the Pacific Ocean. Robotised machining facilities of networks have been developed, which are moving more slowly than the stream and capture the plastic in a “trap”. Ukrainian student has developed the robot Riveroni, which consists of plastic bottles, containers with microcircuits, aluminium frame, network and a solar battery, and is used for the collection of waste in water-beds.

Japanese scientists develop a robot called Geckon, with “sticky tentacles”, with which they plan to clean the outer space. Cleaning in the space is almost impossible due to the zero gravity. However, Geckon is attached even to smooth surfaces, as it takes away its catch from the orbit.

There are young geniuses, who are eager to “clean” the planet. Let’s clean Bulgaria together.